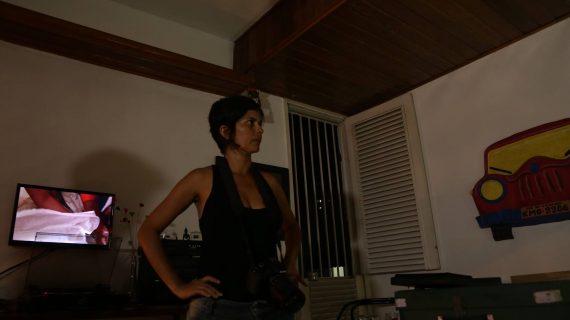 Rosa Melo concepted and directed the BRAZIL VISUAL documentaries. She already made several productions in the audio-visual and arts. She born in Pernambuco on 1973 and has been living in Rio de Janeiro since 2009. As an independent producer, she works in the areas of planning, elaboration and analysis of projects, executive coordination of events, publications, and film productions.

In 2014 she produced the artist Guga Ferraz for the urban interventions:  Volta pro Mar Oferenda (Back the Offer to the Sea), in Natal (RN), and Até onde o Mar ia Até onde o Rio vinha (As far as the Sea went As far as Rio came), in Rio de Janeiro. In addition to the exhibitions: Territórios e Capital (Territories and Capital) of Lourival Cuquinha at MAM / RJ, and O Brasil é o Meu Abismo (Brazil is My Abyss) of Daniel Santiago at MAC Niterói/RJ. In 2010, she produced the artist Paulo Bruscky for his exhibition Arte em Todos os Sentidos (Art in All Senses) at the X Havana Biennial.

From 2010 to 2012, she was a Titular Member of the Colegiado Nacional de Artes Visuais (National Board of Visual Arts) of CNPC and in the Comitê Técnico do Fundo Setorial de Cultura (Technical Committee of the Sectoral Culture Fund) of the Ministry of Culture as representative of civil society. During that period, she also reviewed and analyzed with technical opinions on cultural projects of Pronac/Secretaria de Fomento (Secretariat of Promotion)/Ministry of Culture in the areas of Visual Arts and Audio-visual (film production).

From 2008 to 2012, she worked as executive coordinator in the research and production scholarship program of the 47th Salão de Artes Plásticas of Pernambuco by the Fundação de Cultura e de Patrimônio Histórico e Artístico do Governo do Estado Pernambuco (Foundation of Culture and Historic and Artistic Patrimony of the Government of the State of Pernambuco). And producer coordinator of the Arts SPA (Visual Arts Week) in Recife from 2004 to 2007.